26th matchday of the Bundesliga (Germany): On Saturday at 3:30 PM Bayern Munich (#1 with 58 points) faces VfB Stuttgart (#8 with 36 points). The match will be played in Munich at Allianz Arena. Live broadcast is available via BT Sport 2. Strong favourite according to the bookmakers is Bayern Munich with a probability to win of 85% and odds of 9/50. VfB Stuttgart’s chances for a victory are currently at 8% with odds of 11/1. Our free betting tip for Bayern Munich vs VfB Stuttgart includes the best data and historical stats analysis of both teams, as well as a H2H comparison.

For both match halves and the final result Bayern Munich is the strong favourite in this match. For over/under bets this encounter might also offer some good opportunities, bookmakers expect more than 2.5 goals and offer odds of 11/50 for it to happen. A bet on both teams to score is offered at odds of 137/100.

In the head-to-head comparison Bayern Munich won the last match 1:3 (1:2), in the Bundesliga 4 months ago. For VfB Stuttgart Coulibaly was able to score one goal. The goalscorers for Bayern Munich were Lewandowski, Coman and Costa.

The direct matches between the two teams ended with 4.0 goals on average. In the head-to-head (H2H) comparison Bayern Munich so far has never lost to VfB Stuttgart. Bayern Munich has always had an advantage in the first half and has won every second half against VfB Stuttgart.

In Bayern Munich’s last match they showed a dominant performance against 1. FC Cologne 19 days ago. In both halves 1. FC Cologne didn’t have much of a chance against Bayern Munich, after 90 minutes they won with a final score of 5:1 (2:0).
In the Bundesliga Bayern Munich is currently leading the rankings as the first of the league. They have a goal difference of 39 in 25 matches and 58 points. When playing at home Bayern Munich has an active win streak of 2 games, in total they have a win streak of 3 games. In their last 5 encounters they had 3 wins, one draw and one loss. 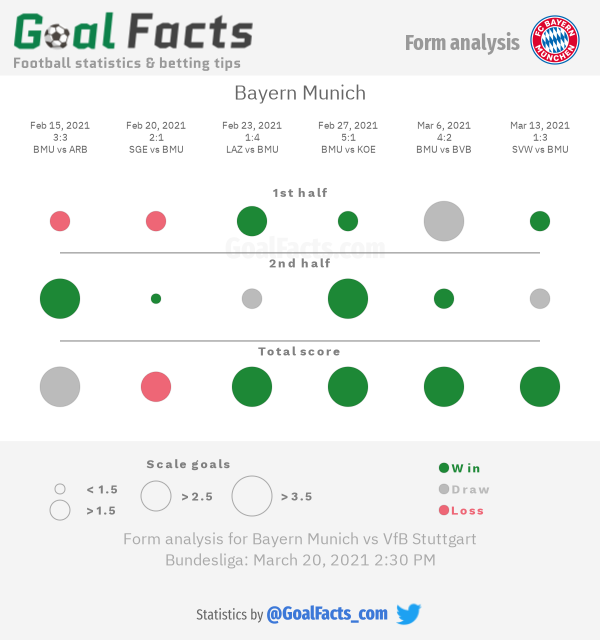 For Bayern Munich the scored and conceded statistics of the past 23 matches look evenly distributed.
When playing at home, the first halves of Bayern Munich rarely ended in a draw.

Against 1. FC Cologne a month ago VfB Stuttgart managed to secure a 0:1 victory, scoring only in the second half of the game. 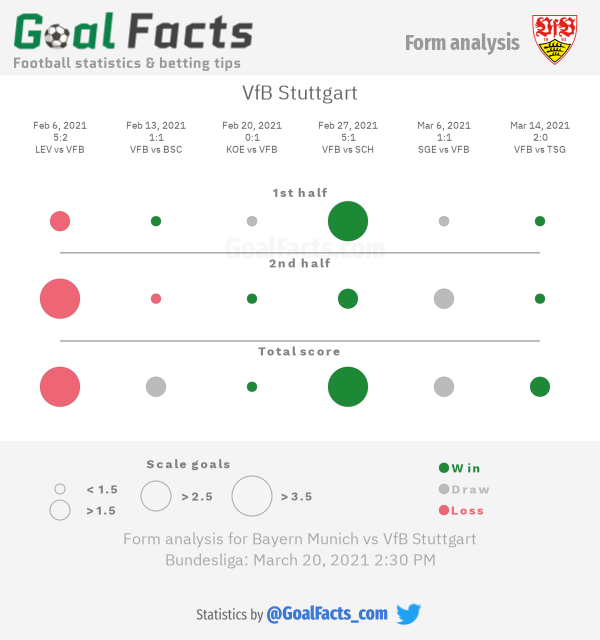 A look at the distribution of goals in the two halves for VfB Stuttgart shows us that so far they have been able to score more goals in the second half (64%) than in the first. The goals conceded are evenly distributed between the two halves of the game.
outliers.WLD.away.as-away-h2-draw-low