25th matchday of the 2nd Bundesliga (Germany): On Friday at 6:30 PM VfL Bochum (#1 with 48 points) faces Hamburger SV (#3 with 43 points). The match will be played in Bochum at Vonovia Ruhrstadion. Live broadcast is available via Sky Bundesliga HD 2. Slight favourites are VfL Bochum 1846 with a win probability of 40% compared to 37% for Hamburger SV. So it should be an exciting encounter. Our free betting tip for VfL Bochum vs Hamburger SV includes the best data and historical stats analysis of both teams, as well as a H2H comparison.

In the head-to-head comparison VfL Bochum won the last match 1:3 (0:1), in the 2nd Bundesliga 4 months ago. For Hamburger SV Terodde was able to score one goal. The goalscorers for VfL Bochum were Blum, Zulj and Chibsah.

For the past matches where two teams played each other there were 1.8 on average. In the H2H comparison of VfL Bochum and Hamburger SV, the guests had 2 wins in the past 5 matches. The first half in these games was won by VfL Bochum in 20% of the games, while the second half was won in 40% of the games by Hamburger SV.

When playing as the home team VfL Bochum’s has a 82% chance to score at least one goal during the match.

In their last match 20 days ago VfL Bochum lost the first half 1:0 and was not able to turn it around in the second half against Erzgebirge Aue for a final result of 1:0.
In the 2nd Bundesliga VfL Bochum is currently leading the rankings as the first of the league. They have a goal difference of 21 in 24 matches and 48 points. They currently have a winning streak of 2 games (as home and in total), in the last 5 they had 4 wins, 0 draws and one loss. 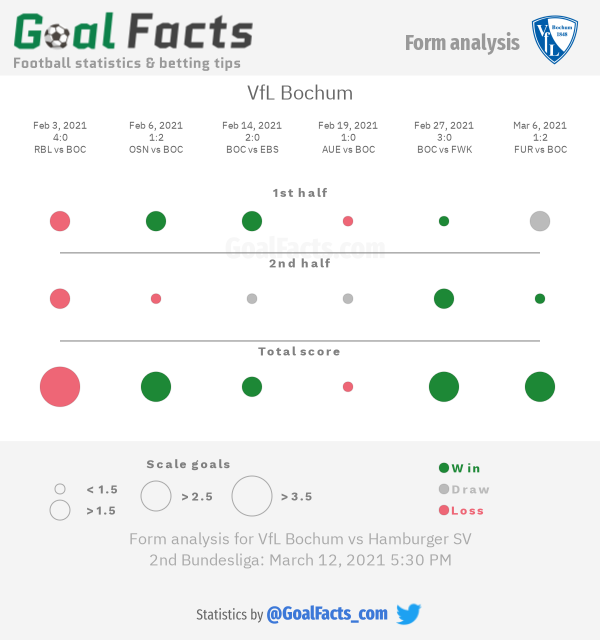 Although Hamburger SV had a strong second half against FC Wurzburger Kickers 18 days ago, they lost their last match in the 2nd Bundesliga 3:2 as the guest team.

Hamburger SV is currently at top of the 2nd Bundesliga rankings on spot #3 with 43 points after 24 matches. They have a goal difference of 19. Hamburger SV lost their last 2nd Bundesliga game and in the last five games they had 0 wins, 2 losses and 3 draws. 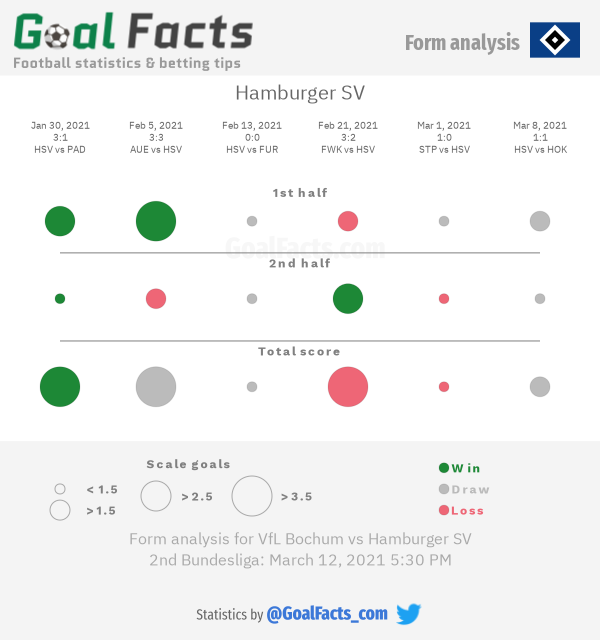 In the last 22 games Hamburger SV conceded more goals in the first half (64%) than in the second half.
When Hamburger SV is playing as the away team they have only lost 18% of the games.