22nd matchday of the Bundesliga (Germany): On Sunday at 3:30 PM Hertha BSC (#15 with 18 points) faces RB Leipzig (#2 with 44 points). The match will be played in Berlin at Olympiastadion. Live broadcast is available via Sky Bundesliga HD 1. RB Leipzig is the clear favourite of the match with a predicted win rate of 61% and odds of 13/20 to win. For a victory of Hertha BSC bookmakers currently offer odds of 17/4. Our free betting tip for Hertha BSC vs RB Leipzig includes the best data and historical stats analysis of both teams, as well as an H2H comparison.

The bookmakers agree on this matchup and predict a win for RB Leipzig, also favouring them win both the first and second half of the match against Hertha BSC. In terms of goal predictions, it seems unclear what the actual outcome will be. The chances for both teams to score seem likely, odds for a BTTS bet are at 21/20, for over 2.5 goals you currently get odds of 18/25, for over 3.5 it’s 7/4.

The last match of the two competitors was won by RB Leipzig with a final score of 2:1 (1:1), in the Bundesliga 4 months ago. Goals for RB Leipzig were scored by Upamecano (one goal) and Sabitzer (one goal). For Hertha BSC Cordoba was able to score one goal.

The direct matches between the two teams ended with 4.2 goals on average. In the last 5 H2H matches RB Leipzig has had 4 wins, compared to 0 wins for Hertha BSC. RB Leipzig also won the first and second half more often when the two teams played against each other. You can see the full H2H data in the table below.

In the last 10 games as the home team, Hertha BSC has conceded a goal in 8 matches.

As the away team, RB Leipzig was able to score a goal in 9 out of 10 matches.

The first half for both teams often ended below 1.5 goals. You can find a full statistical breakdown and the current betting in the tables below. For the home team, Hertha’s BSC matches ended with 3.0 goals (Bundesliga 20/21 matches).
When RB Leipzig is playing as the away team, the second half rarely has more than 1.5 goals. RB Leipzig on average had 2.6 goals in the last 21 matches (Bundesliga 20/21).

In their last match 6 days ago Hertha BSC faced VfB Stuttgart. After losing the first half 1:0, they won the second half 0:1. The match ended in a 1:1 draw.
They are currently ranked in the bottom half of the Bundesliga standings at position #15 with 18 points and a goal difference of -11. Hertha BSC’s form has recently not been great, you can see past halftime results, goals, and scores of their last matches in the following infographic. 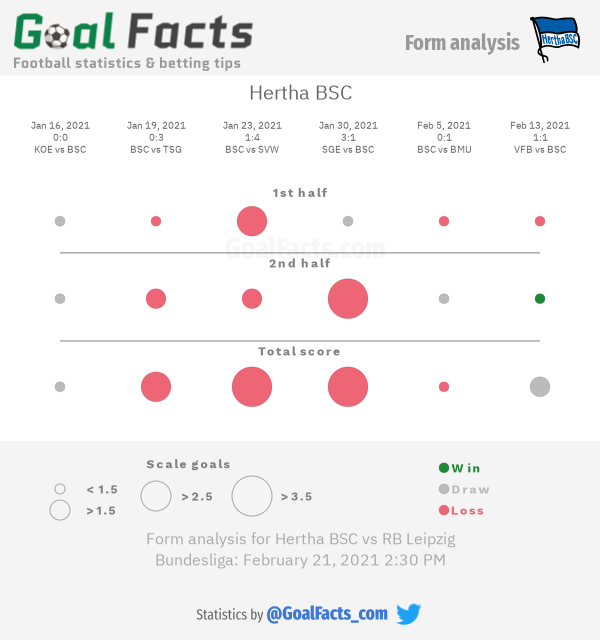 The second halves for Hertha BSC were much more eventful in the last 21 games, they shot and conceded more goals than in the first half of matches.
When Hertha BSC played as the home team, they won only 20% of the first halves.

RB Leipzig last faced FC Augsburg 7 days ago at home. They won the first half 2:0 and were able to maintain the lead throughout a suboptimal second half (0:1) to secure a 2:1 victory.

RB Leipzig is currently at top of the Bundesliga rankings on spot #2 with 44 points after 21 matches. They have a goal difference of 19. As the away team, they won the last 3 matches. We’ve compiled more data on their current form in the following infographic.

For RB Leipzig the scored and conceded statistics of the past 21 matches look evenly distributed.
As the away team RB Leipzig has low win rate for the first half.