Thursday at 6:55 PM Manchester United FC faces AC Milan in UEFA Europa League. The match will be played in Manchester at Old Trafford. Live broadcast is available via PULS 4 Austria. Strong favourite according to the bookmakers is Manchester United FC with a probability to win of 62% and odds of 31/50. AC Milan’s chances for a victory are currently at 18% with odds of 9/2. Our free betting tip for Manchester United FC vs AC Milan includes the best data and historical stats analysis of both teams, as well as a H2H comparison.

In this UEFA Europa League match the host Manchester United FC is a strong favourite to win the match and they are also clearly favoured to win the first and second halve of the match. A goal for Manchester United FC is predicted by bookmakers, but chances for AC Milan scoring are not looking too bad either. For Both teams to score odds of 19/20 are currently offered. A bet on over 2.5 goals would currently net you 36.40 GBP (odds of 91/100) when putting down a 40GBP bet.

Matches between the two competitors on average ended with 3.0 goals. The last direct encounters of Manchester United FC and AC Milan always ended in a draw after the regular period. But in the extension/penalties Manchester United FC has so far been able to always secure the win.

When playing as the home team Manchester United FC’s has a 80% chance to score at least one goal during the match.

For the home team Manchester United FC matches ended with 3.0 goals (total matches).
First halves for AC Milan when they play as the away team often end with less than 1.5 goals. AC Milan on average had 2.9 goals in the last 30 matches (total).

In their last encounter Manchester United FC faced Manchester City FC as the away team. They won both halves to secure a 0:2 victory after 90 minutes.

In their last encounter AC Milan faced Hellas Verona as the away team. They won both halves to secure a 0:2 victory after 90 minutes. 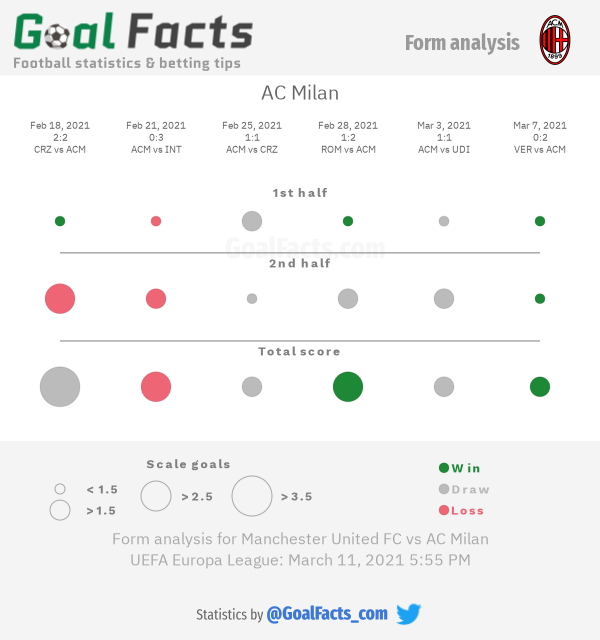 AC Milan conceded more goals in the second half in their last 30 matches.
As the away team AC Milan has a high chance of winning the first half, in the past 15 games it was at 80%.