27th matchday of the Serie A (Italy): On Sunday at 3:00 PM Parma Calcio (#19 with 16 points) faces AS Roma (#4 with 50 points). The match will be played in Parma at Ennio Tardini. AS Roma is the clear favourite of the match with a predicted winrate of 61% and odds of 13/20 to win. For a victory of Parma Calcio bookmakers currently offer odds of 9/2. Our free betting tip for Parma Calcio vs AS Roma includes the best data and historical stats analysis of both teams, as well as a H2H comparison.

According to the betting markets AS Roma is a clear favourite to win the match, they are also expected to win the first and the second half of the game against Parma Calcio. In terms of goal predictions it seems unclear what the actual outcome will be. The chances for both teams to score seem likely, odds for a BTTS bet are at 11/10, for over 2.5 goals you currently get odds of 67/100, for over 3.5 it’s 163/100.

The last match of the two competitors was won by AS Roma with a final score of 3:0 (3:0), in the Serie A 4 months ago. Goals for AS Roma were scored by Mayoral (one goal) and Mkhitaryan (2 goals).Parma Calcio was not able to score a goal in the last match.

Matches between the two competitors on average ended with 2.6 goals. In the last 5 H2H matches AS Roma was had 4 wins, compared to one win for Parma Calcio. AS Roma also won the first and second half more often when the two teams played against each other. You can see the full H2H data in the table below.

For the home team Parma Calcio matches ended with 2.6 goals (Serie A 20/21 matches).
On average the last 9 away matches for AS Roma have ended with 3.8 goals. 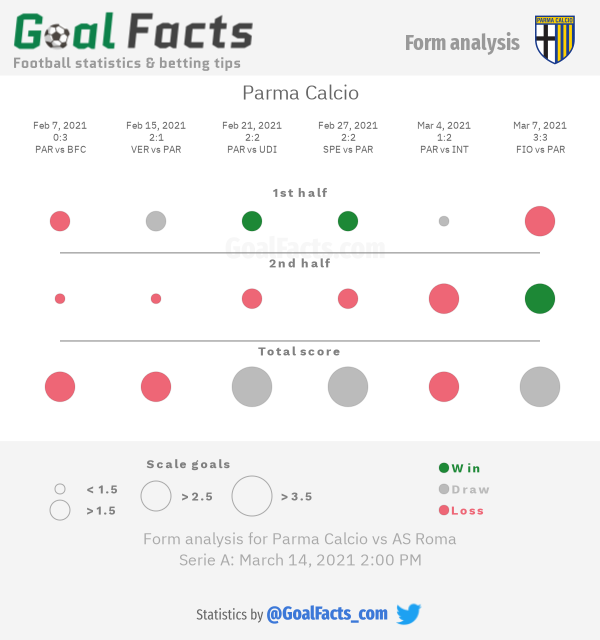 For Parma Calcio the scored and conceded statistics of the past 19 matches look evenly distributed.
When Parma Calcio played as the home team, they won only 10% of first halves.

Go to form analysis for AS Roma

AS Roma welcomed Spezia Calcio to a Serie A match 2 months ago. After a close first half (1:1), AS Roma was able to secure a victory in an exciting second half of the match for a final score of 4:3.

With 50 points after 26 matches AS Roma currently has the #4 spot in the Serie A table. They are currently on a two match winning streak and in the last 5 matches they had 3 wins, one draw and one loss. 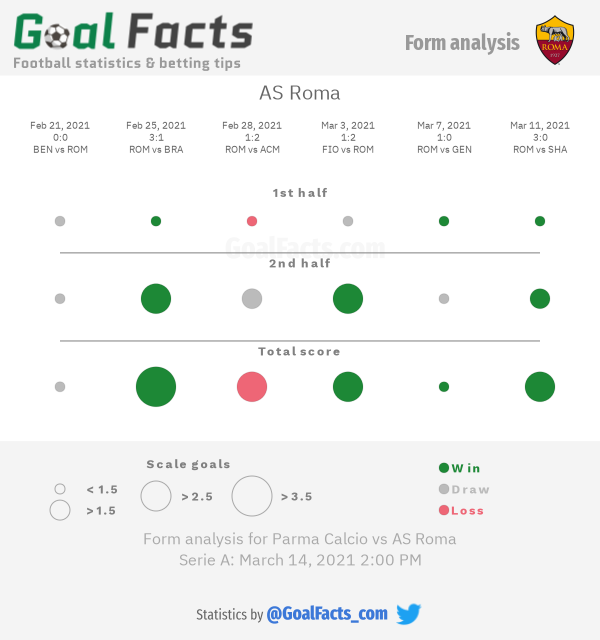 AS Roma conceded more goals in the second half in their last 19 matches.
In the last 9 matches as the guest team AS Roma lost the first half only in 22% of the matches.