Thursday at 9:00 PM AS Roma faces FC Shakhtar Donetsk in UEFA Europa League. The match will be played in Rome at Stadio Olimpico. Strong favourite according to the bookmakers is AS Roma with a probability to win of 65% and odds of 53/100. FC Shakhtar Donetsk’s chances for a victory are currently at 17% with odds of 19/4. Our free betting tip for AS Roma vs FC Shakhtar Donetsk includes the best data and historical stats analysis of both teams, as well as a H2H comparison.

In this UEFA Europa League match the host AS Roma is a strong favourite to win the match and they are also clearly favoured to win the first and second halve of the match. In terms of goals the predictions currently lean towards more than 2.5 during the two halves at odds of 67/100, odds for more than 3.5 goals are at 163/100. A bet on both teams to score might also be worth it, for which bookmakers currently offer odds of 21/20.

When playing as the home team AS Roma’s has a 82% chance to score at least one goal during the match.
In the previous 17 matches as the host AS Roma has only conceded a goal in the first half in 4 matches.

In the past 29 matches FC Shakhtar Donetsk on average scored at least one goal in 76% of matches.

For the home team AS Roma matches ended with 3.3 goals (total matches).
FC Shakhtar Donetsk on average had 2.7 goals in the last 29 matches (total).

AS Roma last played against Genoa CFC 4 days ago and won 1:0. In the Serie A game AS Roma carried their first half lead 1:0 to a victory after a second half draw 0:0. 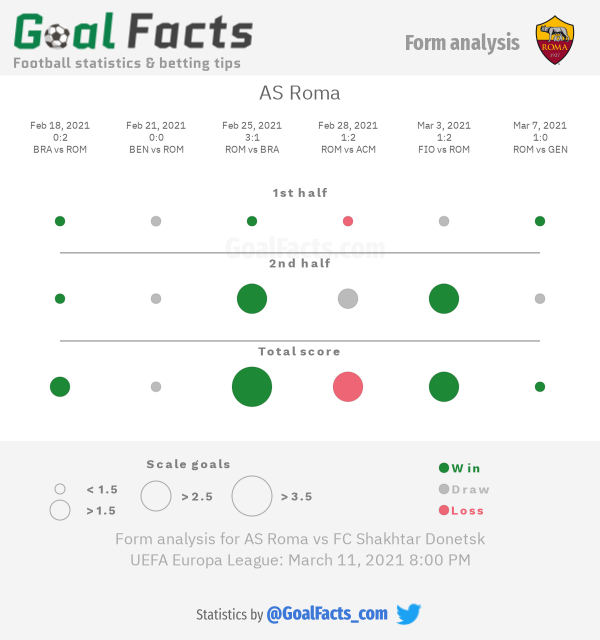 FC Shakhtar Donetsk went up against FC Olimpik Donetsk in the Premier League 5 days ago. They won the first half 0:1 and defended their lead in the second half, for the 0:1 victory as the away team. 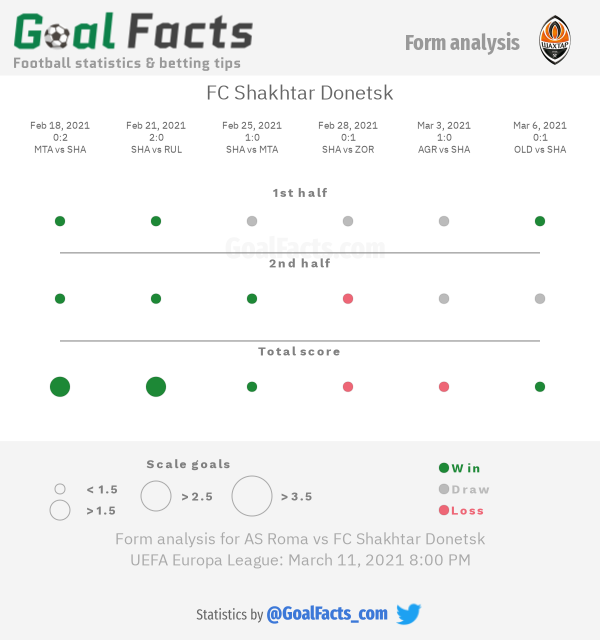 Go to form analysis for AS Roma