2nd matchday of the LaLiga (Spain): On Wednesday at 7:00 PM Sevilla FC (#4 with 51 points) faces Elche CF (#17 with 24 points). The match will be played in Seville at Ramon Sanchez Pizjuan. Strong favourite according to the bookmakers is Sevilla FC with a probability to win of 71% and odds of 2/5. Elche CF’s chances for a victory are currently at 14% with odds of 6/1. Our free betting tip for Sevilla FC vs Elche CF includes the best data and historical stats analysis of both teams, as well as a H2H comparison.

The clear favourite for both the first and second half is Sevilla FC. Overall, the bookmakers expect the home team to have a 71% chance of winning, while a suprise from Elche CF seems unlikely at 14%. A goal for Sevilla FC is predicted by bookmakers, but chances for Elche CF scoring are not looking too bad either. For Both teams to score odds of 31/50 are currently offered. A bet on over 2.5 goals would currently net you 36.40 GBP (odds of 91/100) when putting down a 40GBP bet.

The last match of the two competitors was won by Elche CF with a final score of 2:1 (0:0), in the LaLiga 10 days ago. Goals for Elche CF were scored by Carrillo (one goal) and Guti (one goal). For Sevilla FC De Jong was able to score one goal.

Matches between the two competitors on average ended with 3.0 goals. If we take a closer look at the last matches the two teams played against each other, the data shows that Elche CF previously won more often. In the last 1 they had one win. An interesting piece of data: the first half between Sevilla FC and Elche CF always ended in a draw, while the second half was won by Elche CF in 100% of the games.

When playing as the home team Sevilla FC’s has a 78% chance to score at least one goal during the match.
In the second half Sevilla FC has only conceded a goal in 5 out of 9 matches.

As the away team, Elche CF was able to score a goal in 6 out of 8 matches.
In 9 out of 10 matches as the home team, Elche CF has conceded at least one goal.

Only in a few of the past matches did the second half for Sevilla FC end with more than 1.5 goals. On average games for Sevilla FC have ended with 2.2 goals in the last 19 (LaLiga 20/21 matches).
First halves for Elche CF when they play as the away team often end with less than 1.5 goals. On average the guest team Elche CF had 2.3 goals in their last 18 games.

Sevilla FC won their last match at home against Cadiz CF 2 months ago. In an exciting first half they took a 2:0 lead into the halftime break and didn’t back down in the second half of the match to secure a 3:0 victory.
In the LaLiga standings Sevilla FC is currently ranked at #4 after 26 played matches with 51 points. In the last 5 games of the LaLiga Sevilla FC had 3 wins, 0 draws and 2 losses. 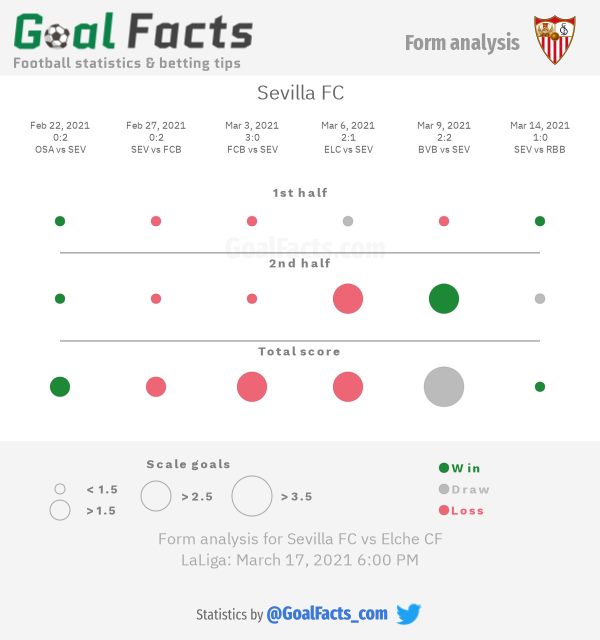 For Sevilla FC the scored and conceded statistics of the past 19 matches look evenly distributed.
Sevilla FC lost the first half only in 11% of the matches as the home team, the second half was lost in 22% of the matches.

2 months ago Elche CF faced FC Barcelona and lost 0:2 in front of their home crowd.

For Elche CF things have not looked ideal in the LaLiga rankings so far. A goal difference of -15 and 24 points after 26 matches currently result in spot #17 of the LaLiga standings. In the LaLiga Elche CF lost their most recent match and in the last five games they had 2 wins, 0 draws and 3 losses. 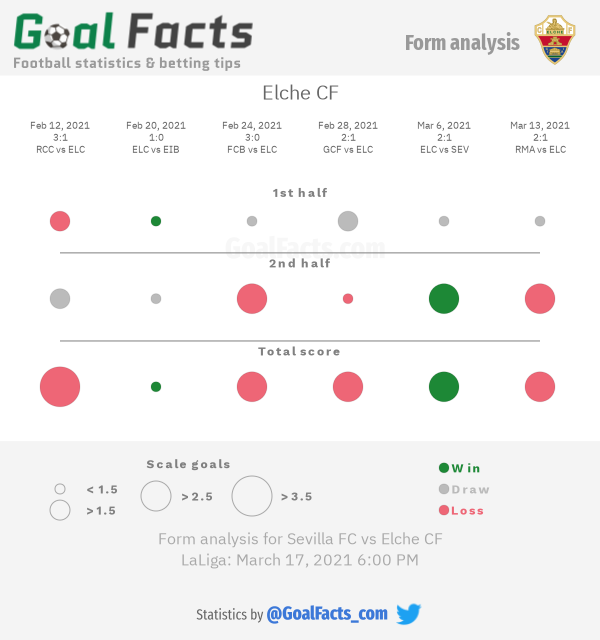 For Elche CF the scored and conceded statistics of the past 18 matches look evenly distributed.
When Elche CF is the away team their first halves rarely end in a draw.