The underdog of this match is Werder Bremen (odds of 16/5) and the clear favourite for a win is VfL Wolfsburg (odds of 17/20). In terms of goals for the match predictions are currently tending towards less than 2.5 goals with odds of 4/5, for both teams to score the odds are at 4/5.

The last match of the two competitors was won by VfL Wolfsburg with a final score of 5:3 (3:2), in the Bundesliga 4 months ago. VfL Wolfsburg’s goalscorers were Baku with one goal, Brooks with one goal, Weghorst (2 goals), Bialek with one goal and frustratingly an own goal by Brooks. Goals for Werder Bremen were scored by Bittencourt (one goal) and Mohwald (one goal).

The direct matches between the two teams ended with 3.6 goals on average. A direct comparison of the two teams shows no clear winner. The first half went slightly better for Werder Bremen while the second half was won more often by VfL Wolfsburg. You can see a full breakdown of the statistics in the table below.

As the away team, VfL Wolfsburg was able to score a goal in 11 out of 12 matches.

For the home team Werder Bremen matches ended with 2.6 goals (Bundesliga 20/21 matches).
On average the guest team VfL Wolfsburg had 2.5 goals in their last 22 games.

In Werder Bremen’s last match 20 days ago they faced Eintracht Frankfurt in their home stadium. After a disappointing first half they managed to come back decisively and win with a final score of 2:1 (0:1).
They are currently ranked in the bottom half of the Bundesliga standings at position #12 with 30 points and a goal difference of -6. In the last 5 games Werder Bremen had 2 wins, one draw and 2 losses. 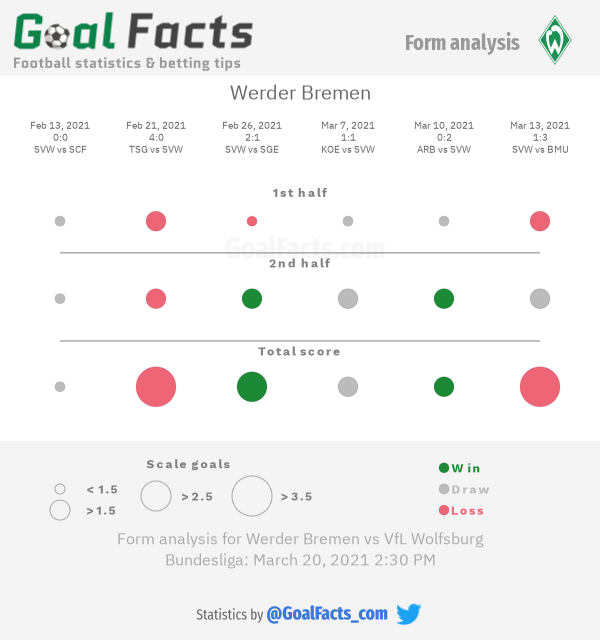 For Werder Bremen the scored and conceded statistics of the past 22 matches look evenly distributed.
When Werder Bremen played as the home team, they won only 9% of first halves.

In the last match a month ago VfL Wolfsburg faced Arminia Bielefeld as the away team. VfL Wolfsburg came out on top in both halves, winning 0:3 (0:1) after 90 minutes.

VfL Wolfsburg is currently at top of the Bundesliga rankings on spot #3 with 48 points after 25 matches. They have a goal difference of 22. VfL Wolfsburg currently has a record of 3 wins, one draw und one loss (last 5 matches). Fore more information on VfL Wolfsburg’s form, see the infographics below. 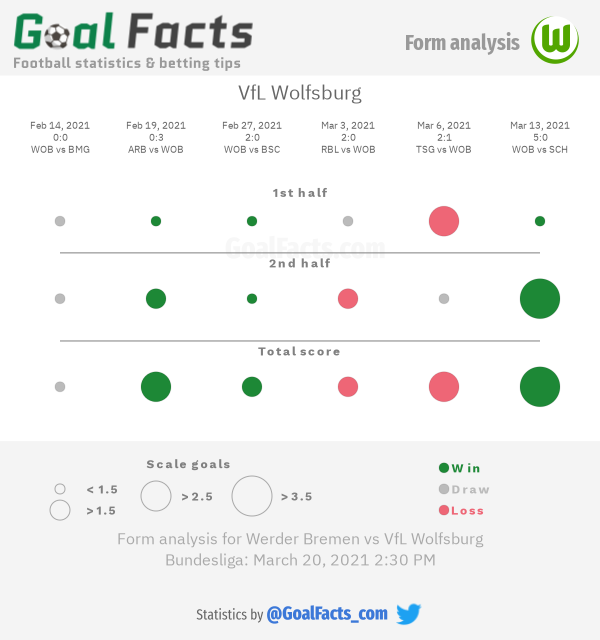 We have analysed the last 22 games of VfL Wolfsburg and summarised all the findings for you below. An exciting finding for the upcoming match, VfL Wolfsburg scores more goals in the first half than in the second. As far as goals conceded are concerned, the distribution is evenly split between the two halves.
In the last 12 matches as the guest team VfL Wolfsburg lost the first half only in 8% of the matches.