24th matchday of the Serie A (Italy): On Wednesday at 3:00 PM Torino FC (#18 with 20 points) faces Sassuolo Calcio (#8 with 39 points). The match will be played in Turin at Stadio Olimpico Grande Torino. Torino FC is currently a very slight favorite in this matchup, with a win probability of 41% and odds of 29/20, Sassuolo Calcio’s probability to win is 36% with odds of 9/5. Our free betting tip for Torino FC vs Sassuolo Calcio includes the best data and historical stats analysis of both teams, as well as a H2H comparison.

Bookmakers are anticipating a close match for the two teams. While Torino FC is slightly favored to win the match, there is no clear tendency for first or second half results. The chances of both teams scoring a goal are very high, both Torino FC and Sassuolo Calcio have scored frequently in recent matches, odds for a BTTS bet are at 6/5. For a bet on more than 2.5 goals the odds are currently at 4/5 and for more than 3.5 goals they are at 2/1 at the bookmakers.

The direct matches between the two teams ended with 3.8 goals on average. Torino FC had 2 wins in the last 5 matches against Sassuolo Calcio. The first halves were also won more often by Torino FC, but the second halves were won by Sassuolo Calcio in 40% of games played.

As the home team Torino FC played against ACF Fiorentina 2 months ago. A slow first half had no goals and a close second half resulted in a final score of 1:1 in the Serie A match.
With 20 points after 25 played games, Torino FC is the last team of the Serie A rankings at position #18. Torino FC lost their last Serie A match, in total for the last five matches they had one win, 2 draws and 2 losses.

Torino FC conceded more goals in the second half in their last 20 matches.
When Torino FC played as the home team, they won only 20% of first halves.

The most recent match of Sassuolo Calcio was the Serie A match 2 months ago against the host of the match Cagliari Calcio. The match ended in a 1:1 draw. 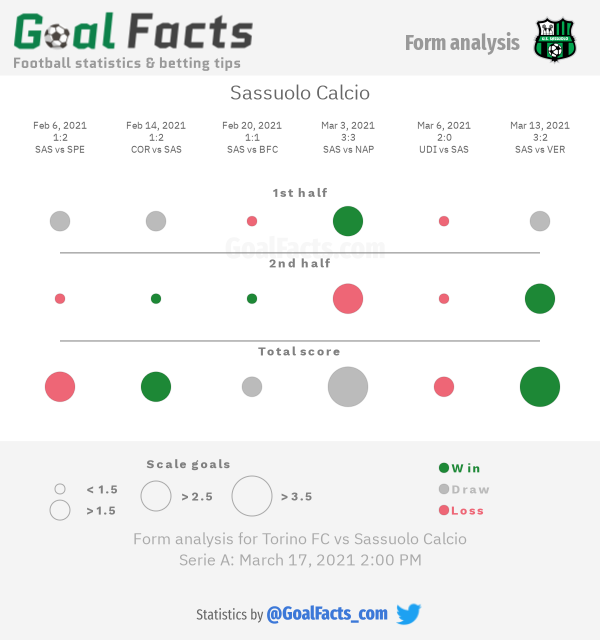